How I Lost My Legs by Roy Heine

Many of you have been asking me about Sexy Legs.  In a special guest post, this is his story.

How I Lost My Legs.

A few years ago I thought I had it all.  I was living the dream – a wife, twin boys, a huge house, a dog and our own business in architectural drafting and building.  Work was plentiful.  Everything seemed to be running according to plan.  Whose plan?  I don’t know.

But, my wife and I were both terribly unhappy – constantly fighting about the most frivolous things – often to the point where I ended up spending many nights on the couch.  We went for marriage counseling and even saw a psychologist.  Nothing helped.

The stress started taking its toll in our lives and on our business.  The more we fought, the more distant we became and the respect we once had for each other slowly ebbed away.

I had many sleepless nights and there was plenty of time lost due to stress.  How was I going to sort out this mess?  Who would get custody of the boys?  How the heck would we split a business and divide the house?

My 17-year-old boys chose to stay with me at the time.  I ended up with over a million-and-a-half rand worth of debt as well as a divorce decree and settlement.

I worked hard to rebuild my life – slowly paying off this massive debt.  I realised that I needed to spend time finding out who I was again in order to learn to love again.  I spent a full year doing just that – learning and reconnecting with myself.

My brother convinced me to join an online dating site and my son helped me to load my profile.  I started conversing with various women of different ages – trying to find new friends and building a new life.  I scrolled through hundreds of pics and profiles.  One jumped out at me – catching my eye with her radiant smile.  But, it was her profile name – DifferentlyAbled – which drew me to look further and read all about her.  Her narratives detailed exactly what she was looking for in a man – and I possessed many of those qualities (I think).  So, I took a chance and contacted her.

It turned out to be Tracy Todd from Nelspruit.  She had been left a quadriplegic after a motor vehicle accident more than 12 years ago.  I was amazed at her bravery for putting her profile on a dating site.

I told Tracy a bit about myself and that I was a keen runner.  She wrote back saying that it had been her dream to run The Comrades Marathon but sadly, she never got the chance before her accident.  I immediately responded, without thinking, saying that I would run it for her and give her the medal.  What was I thinking?

I had run eight times before but only finishing two.  I also had a heart attack five years ago.  What then, was it that made me volunteer?  I can only put it down to a divine intervention.

I began training hard.  I didn’t want to disappoint.  I shared my training regime with Tracy so that she could be part of it all.  I wanted her to feel as if she was running. 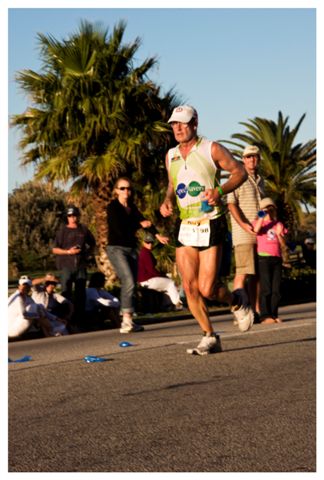 Later, I also decided to do the Ironman as a form of cross training.  I kept Tracy informed of our progress.  She encouraged me every step of the way.

Our friendship grew.  We conversed easily.  I asked her many questions about her life as a quadriplegic.  I was curious about how she ate, how she went to the toilet, how she typed, where she lived, how she made a living and much more.  The more I asked, the more I wanted to know.  She was never shy and always answered my questions in great detail.

I had no fear of her “condition”.  I was immediately captivated by her charm, poise and the ease with which her words flowed.  Her encouragement and motivation to others ring true to my own beliefs of reaching out and helping others.

The night before The Comrades marathon, my friend, Tracy Todd called to say that she was so proud of me for what I was doing for her.  My chest was bursting for her.  Oh my word!  This woman made me feel so good – and I’d never even met her in person.

I think it was at this moment that I realised that I was falling for Tracy.  I wanted to tell her.  But, first I had to go and slay the mighty Comrades Dragon.

The next day, Tracy completed the run through me and I became known as her Comrades Legs.

A month later I delivered Tracy’s medal to her in person.

As I came out the arrivals terminal, I saw her, face-to-face, for the first time.  It felt like we were the only two people in the entire airport.  I ran to her – it felt like slow motion.  I dropped my bags as I flung my arms around her.  Her smile would have made any man’s legs weak.  But hey, I’m Comrades Legs.

It took about two minutes after her parents dropped us off at her place for me to kiss her.  The butterflies that had been lying dormant in my tummy awoke from their deep sleep and started flying around in a panicked frenzy.

Over the next five days we sat and chatted for hours on end – pouring our hearts out to one another – catching up on the last 40 years.  I knew then, that this was indeed a very special woman and that we had done the most amazing thing together

I was en-route overseas to see my son and I left my heart in Nelspruit when I departed.  But, I never left empty-handed.  I knew that I had stolen hers too.

Upon my return, I detoured back to Nelspruit.  I was treated to the most romantic evening of my life – candlelight, a home-cooked meal, champagne and the woman of my dreams – Tracy.  We spent the evening eating, talking, kissing and loving one another.  Now, I know you want me to divulge all the saucy details but a gentleman doesn’t kiss and tell all.

We have made time to see one another as often as possible to explore the boundaries of our love, stretching them to new limits.  I don’t see Tracy’s disability.  Instead, I see how she enriches my life.  She does not see the flaws I have (I hope).  Instead, she just stares at my sexy legs.

We are both people of this world who want to be respected for who and what we are, able or not, it does not matter. By knowing Tracy, my perceptions of disability have changed as I now make sure that all the buildings I design are wheelchair friendly.  I recently built a ramp at our church.  I get highly irritated if I see people parking in a disabled parking bay when they are clearly able.

I’m more focused and calm now.  Everyday things now remind me of this very special lady and I cannot wait to tell her each day.   My family values have returned and I dream of a future with her.  I have learned that there is life after marriage and divorce.  You just have to put yourself out there – and give.

Author of Brave Lotus Flower Rides the Dragon – an intimate and inspiring memoir of a quadriplegic. Inspirational Speaker. Teacher. Counsellor. Wife. Mother. Animal lover. Although I need a wheelchair to get around, it is most certainly not what defines me.
View all posts by Tracy Todd (Brave Lotus Flower) →
This entry was posted in Uncategorized and tagged inspiration, motivation, Nelspruit, quadriplegic, Roy Heine, sexy legs, the comrades marathon, the Ironman, Tracy Todd. Bookmark the permalink.

25 Responses to How I Lost My Legs by Roy Heine